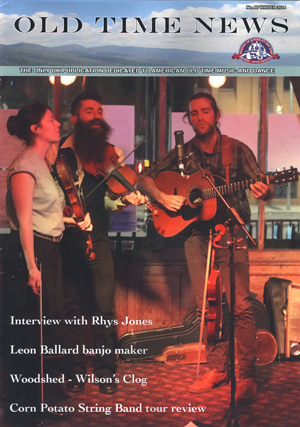 What best describes the Corn Potato String Band—and what comes through on their debut recording—are such concepts as eclecticism and good humor; recklessness, yet talent enough to keep that recklessness in check; and charm, yet not in an overly sweet, cloying way. They start with a foundation as a traditional fiddle, banjo, and guitar string band. Aaron Jonah Lewis plays all three of those instruments, as does Lindsay McCaw (adding in Hawaiian steel guitar), while Ben Belcher plays banjo and guitar. Who plays what on which track is not stated. There is also some singing on three tracks, again without attribution.

In the traditional fiddle band formation, they tackle “Chinese Breakdown,” “Cumberland Gap,” and Arthur Smith’s 1937 ripper, “Going To Town.” Of those, “Cumberland Gap” is most in the fiddle-band style. On “Chinese Breakdown,” using twin fiddles and guitar, they manage to voice the fiddle parts so that there is the effect of a non-existent accordion, giving the tune a merry-go-round-broke-down whirl. For “Going To Town” the guitar is replaced by bluegrass banjo. All three really get at it and stay at it.

From that base they head in many directions, drawing material from any number of styles, none less than 75 years old. The recording’s second number is Walter Couch and the Wilkes Ramblers’ 1937 song, “Chesapeake Bay,” a raggy, vaudeville-type number with lots of pep, and patter lyrics about spooning and moons and cruising “up and down, all along the Chesapeake Bay.” The banjo solo here, in a rapid two-finger style, is great fun. A couple tracks later, the band shifts to a polka “Peor Es Nada,” recorded long ago by El Trio Alegre. A multiple-section piece, “Peor…” has a classic Mexican string band sound that is irresistible. The band is pretty much dead-on in their interpretation, coming very close to matching the zest of the original. That’s followed by a somewhat standard, though no less enjoyable, version of “Golden Slippers,” and by a rather torrid version of “Black And White Rag.” Next comes “Nola,” done as a twin banjo piece in a manner reminiscent of Vess Ossman. The track is highly entertaining. “Coquette” follows two tracks later, and while this vocal trio version with banjo backing won’t make you think of the Mills Brothers, the charm is there, and its slow tempo is a nice break. “That’s It,” a slightly klezmerish jazz tune of unknown origin, follows, and that in turn by another shift, this time to “Marsovia,” a waltz first recorded in 1917 by accordionist Pietro Deiro. Again, nothing but charm and nothing but charm in a good way. The album closes out on “Chasing Rainbows.” Here the schmaltz might be just a bit over the top, but by this point the band has earned the right to be a bit schmaltzy.

Also here are two originals by Lewis, “Bell And Anchor Rag” and “Route 77,” both of which are fine examples of writing in a bygone style. “Bell And Anchor” has all those “Chicken Reel” qualities, full of back-and-forth slides and seat-of-the-pants raggy syncopation. “Route 77” uses the twin banjo format of the turn of the century, but tempers it with a bit of a swing feel.

Though there is a familiarity in some of the song choices, the eclecticism, handful of oddities, and musicianship, along with humor and good feeling, makes this a very fine recording of vintage-sounding American music.